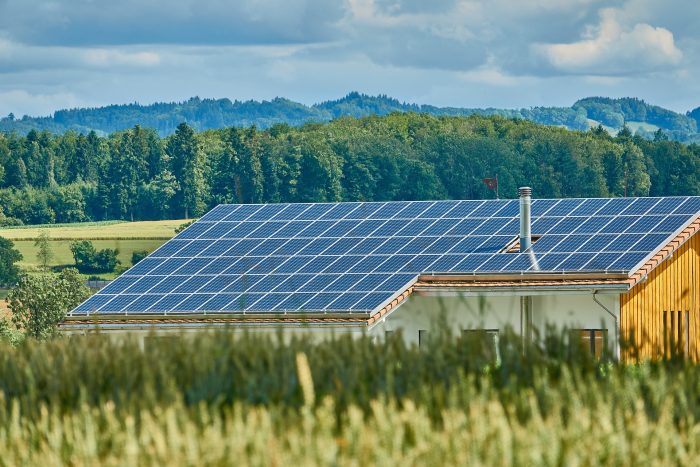 Like water and air, the sun is the basis of life on earth to which it gives heat and light. Inexhaustible, available, unpolluted, solar energy provides enough energy to the earth’s inhabitants every 50 minutes to cover their annual energy needs. The challenge lies in gathering a small part of this caloric and radiating energy.

Two technologies have been developed to make the most of them:

The result is two types of systems , very different from each other:
– Individual systems for private individuals or small communities. Photovoltaic panels allow you to power electrical systems while thermal sensors heat the house or the water in bathrooms and kitchens.
– Large complexes or ” solar power plants “, whether they are photovoltaic or thermodynamic, which spread over hundreds of hectares and produce electricity on a large scale that can power the electricity grid.
The remarkable ductility of solar energy, that is the great power capable of supplying electricity to cities and industries, but also offering autonomy to rural or difficult to access areas are one of its main attractions among other renewable energies.

The photovoltaic (or photoelectric) effect consists of converting light into electricity. It was discovered by the physicist Edmond Becquerel (1839) and found an industrial application in 1954. The principle? Electric current arises from the movement of electrons . To cause this shift, photons (constituent particles of light, which take 1 million years to be born and 8 mn to arrive on earth!) Excite the peripheral electrons of some atoms of semiconductor elements, mainly silicon.

In practice, a photovoltaic cell receives sunlight and transforms it into electricity by means of a semiconductor (i.e. a material whose ability to conduct electricity, the so-called conductivity), initially weak, can increase by virtue of some factors: temperature, brightness, presence of impurities … The silicon used in the cells of photovoltaic panels is a semiconductor: exposure to light makes it a conductor of electricity. Various cells make up a photovoltaic module that produces direct current, which is then transformed into alternative current by an undulator.

The modules can be used in small plants or in large power plants .

They are devices that operate at low temperatures (less than 100 ° C) for use in the home or in the tertiary sector (hot water and heating), as well as to cover industrial needs.

Thermal collectors are used to absorb solar heat and return it to a caloportatore liquid (a liquid or gas that carries the heat) which circulates towards the places of use. The sensors can be simple (domestic use) or very sophisticated (industrial use).

Generally (common uses), they are flat sensors, made up of a black body that absorbs solar radiation, a thermal insulator and a glass that acts as a “greenhouse effect”. The rise in temperature with respect to the surrounding environment can go up to + 70 ° C.

It consists in concentrating solar radiation (we are talking about concentrated solar energy or CSP) thanks to collectors that heat a heat carrier fluid (gas, oils, molten salts…) at a high temperature. It exchanges its heat with a water network, whose steam turns a turbine (mechanical energy) that produces electricity.

The collection of solar radiation is carried out in large power plants made of flat or parabolic mirrors, arranged in large spaces. This technology is suitable for countries where irradiation is strong, for example southern Europe or deserts. These systems do not work in overcast or heavy haze conditions: a mechanical system is required that continuously and automatically directs the mirrors towards the sun.

what is this pigment that could change the future?

The most recent research in the field of technological development in the field of solar energy has sought to obviate the production costs (and energy costs) of silicon cells. The main idea was to try to manufacture photovoltaic cells with a material comparable to silicon, but whose costs would have been significantly lower .

The first attempts were directed towards complex chemical materials capable of absorbing light. Subsequently, however, perovskite, a pigment, made it possible to work with simple technologies, at low temperatures (no more than 100 ° C, against 1400 ° C for silicon) and with very affordable costs.

It will still take about three years and outdoor tests (in very hot and very cold conditions) for this technology to be commercialised, whose development promises to be extraordinary, not only because there are many countries that are working on it, but because the costs will be considerably more affordable.

To produce one watt, it takes 6 grams of silicon, while 0.006 grams of is enough (1 gram of this material is enough for a 1m2 panel). In terms of production, silicon cells cost 8 cents per kilowatt hour. With , the estimated cost will be around 3 cents, but above all, the energy depreciation will be much faster : 6 months against the 2.5 years of the silicon panel.

If the prospects are rosy and one can imagine that , transparent like glass, can even be integrated into the architecture of buildings, its toxicity remains a problem to be solved.. Composed of lead, a material that creates neurological discomfort, some precautions must be taken in the meantime, hoping for a total resolution in the future, to avoid any contact with soil and water.

Incentives and support for those who install photovoltaics

Photovoltaics is not only an eco-sustainable choice, but thanks to state and sometimes corporate incentives, it allows families to achieve an economic advantage.

Moreover, the deductions also cover the expenses for the purchase of accessories, such as the batteries in which to store the energy produced (maximum ceiling: 96 thousand euros).Today, the energy market offers “turnkey” solutions for photovoltaics; many operators, sometimes engaged in the role of energy suppliers, able to present complete solutions for the construction of domestic photovoltaic systems to be connected to the home system and to the electricity grid in order to minimize the actual cost of energy in the house.

The History of Solar Energy

The Sun has been for many civilizations a deity to be worshiped and honored. More than 3000 years before Christ, the Egyptians revered it; other civilizations such as the Indians, Persia, the Greeks or even the Incas and the Aztecs will be equally fascinated (for the Aztecs, gold is theo cuitabl, blood and physical fluid of the solar god, a substance that guarantees the eternity of the world) .

Nothing strange if we consider that the sun is one of the elements necessary for the development of life: responsible for the water cycle (evaporation> clouds> rain / snow> rivers) and photosynthesis, its energy declines into light and heat.

It was the same principle and the same energy that allowed in 776 BC to light the flame of the first Olympic Games and which will be reused by Archimedes 5 centuries later to destroy the Roman fleet that wanted to besiege Syracuse: by means of bronze shields that reflected the light of the sun (like mirrors) it was possible to concentrate the energy on the sails of the enemy and set fire to the boats from a distance.

Printing services or scanning: a software solution for every need